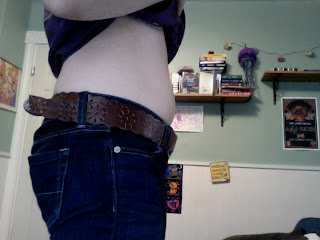 Still pretty flat, though I definitely have a little more bloating.  Pants are still loose on me, but at six weeks, no one would expect them to be tight (and if they are, again, that’s bloating not the baby)!

One week from today, July 6th, is my first prenatal visit.  I’m excited and terrified at the same time.  I want to see the little parasite that is growing in my uterus, but, at the same time, I’m scared I won’t make it to 7 weeks.  Everyone says “stay positive” and I definitely am trying, but I
can’t shake the fear of a miscarriage.  I’m still trying to make a decision on my choice of practitioner. 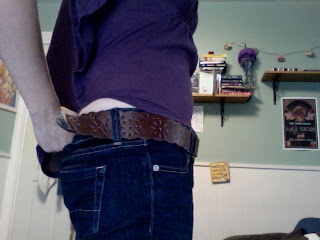 Dr. Paul Smith is awesome because
he is a feminist, believes strongly that the woman knows her body best, and teaches other ob/gyns to listen to their female patients.

That being said, he’s also just one doctor, and if he gets called in for a surgery when I go into labor, it’ll just be some random doctor delivering my baby.  And what happens if it’s an impatient doctor who has something else to do?  Well then they are pushing the pictocin and if you don’t deliver fast enough, a C-section.  I really don’t want to have a C-section unless it’s medically necessary. 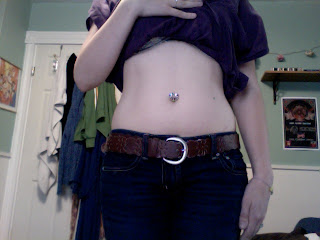 I’d also rather not be forced into labor via pictocin.  I watched “The Business of Being Born”, and I’m even second guessing the idea of an epidural now… I guess I have 8 months to plan and prepare before I make that decision though.  There is another doctor’s office which is connected to the same office as Dr. Paul Smith’s.  It’s called Acadia OB/Gyn.  The good thing about this practice is that they have three doctors and you can meet each one of them.  There is a better chance that one of these three would deliver the baby vs. some random doctor.  Also, one of the doctors has been recommended to me by a Neonatal nurse (my med evaluator).  I’m probably going to give them a call today.


Other than that, nothing else is really going on.  Nate and I are thinking we are probably going to elope on the 23rd.  We are going to get dressed up so I will probably go look at dresses at a consignment shop, or something.  Emma wants to go with me though so I will probably wait to do this until Sunday so I can take her with me =)  Nate and I have looked at some apartments, and I think we are going to look more so at the houses for rent (even if we have to pay for heat) vs.  an apartment, because we haven’t had much luck with the apartments so far.  Tonight we are also going to be going to look at wedding bands =D  I’m very very excited about this.