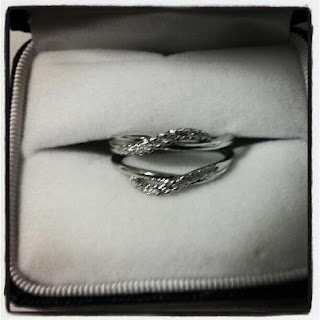 On Friday, the 29th, Nate and I went and picked out our wedding bands.  I didn’t get a chance to snap a picture of his, as his needed to be ordered for the correct size.  We started at J B Robinson, where I saw a few rings that I liked, but Nate didn’t really like anything.  I’m not big into jewelry and flashy things so I was looking at rings that were plain or just small diamond clusters across it.  We went over to Kay’s, and Nate looked at a lot of rings.  There was a wrap at Kay’s that was nice, but I didn’t like that it was trying to change the way my engagement solitaire looked.  It had two diamonds that would be on either side, changing it from a solitaire to a three diamond setting.  I love the solitaire look so I didn’t want this. 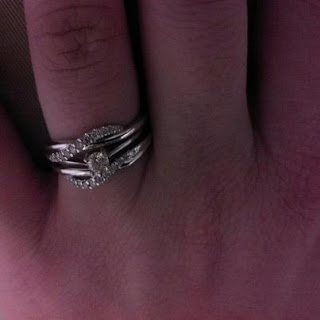 So after Nate picked out a titanium (thinner) band at Kays, we went back to J B Robinson’s.  I ended up seeing another wrap, the one in the pictures and both Nate, and I really liked how it really accentuated my engagement ring.  It’s still not flashy which I like, but it is a little bit more detailed.  It’s funny, I think I’m the only woman who goes to the jewelry store and complains that all the rings are too gawdy, over the top, or too fancy.  I’m just not into jewelry, but it was very important for me to pick out a wedding band I liked.  Previously, I got saddled with a ring that I did not like, didn’t want, and wasn’t allowed to change at all just because it was a family heirloom.  I love wedding bands.  I love what they symbolize.  I love looking at them, and so it’s important that we picked out our rings, and we found something we liked.

So far week 6 hasn’t been too bad.  A little queasy – which is usually in the mornings, but as long as I eat small meals constantly, I have been successful in fighting of m/s.  Exhaustion on the other hand…  I am so tired.  I try not to nap during the day, because when I’m at work, I can’t nap.  When I can go to bed early, I definitely do, but then I wake up way too early.  With my work schedule having me out till 11pm at night, I can’t really be getting tired at 9p or 10p.  I woke up today at 6:35am but forced myself to go back to bed.  Still getting up in the middle of the night to pee though.  This is something I’ve never dealt with before.  It’s super annoying.

For food aversions, I’ve noticed whenever I buy a coffee, ice coffee, or an ice latte (which I’ve been getting mediums instead of larges) I barely drink them.  I guess it may not be a true food aversion, but I’m just not into them.  They don’t taste disgusting, I just don’t want them.  I also haven’t had any cravings as of yet, though I will say somethings taste SO delicious now.  Like guacamole.  Loooove avacado.  I don’t wake up in the middle of the night wanting it, but it seems to be a lot more tasty now.

My first prenatal appointment is on Friday at 9am.  I’m both excited and terrified.  I’m scared something will be wrong, but I want to see it.  I want to hear it’s heart beat, and see whatever I can see on the ultrasound.  I’m nervous because I don’t have that many symptoms other than urination and exhaustion. Oh well, I’ll check back in mid week unless something exciting happens =)