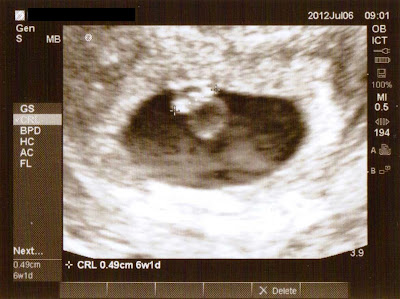 So today was my first prenatal appointment.  I’m a worrier.  I’m always going to be a worrier.  So this appointment was very nerve wracking for me.  I had no clue what was going to happen, what we would see, or anything.

Nate and I went out to breakfast first thing, making sure I had a nice full belly before my appointment.  I knew that I would be getting blood drawn and from previous experience, know that I will get dizzy/nauseated if I don’t have food in my belly.

My appointment was at 9am.  Of course, I had to pee twice before going to the appointment, and wasn’t able to “hold” it, so even though I seem to have to pee constantly, I couldn’t pee in the stupid cup.  I swear, I could have a full bladder but as soon as it’s time to pee in a cup, I become physically unable to remember how to urinate.

Anyway, they did a quick exam, with lots of STD tests.  My doctor is really funny, and was making a lot of really ridiculous jokes.  For example: “We have 24 hour womb service”, he called Nate a “repeat offender”, He said if it’s a boy I could call him “blob” and if it’s a girl “blobara”.  It really helped to take the tension away.

Dr. Smith confirmed that I was 6 weeks 1 day (so 1 day into the 7th week), that I conceived around June 7th, and that my EDD was Feb 28th.  He also looked at my ovaries.  He couldn’t seem to find my right ovary but did confirm that my left ovary was the one with the pregnancy cyst.  The pregnancy cyst is feeding my baby hormones while my placenta grows.  Eventually, the placenta will take over.  This is interesting because when I had implantation pains, it was always on the left side so I think that the culprit was definitely the left ovary that ovulated.

After the appointment, I had like 5 vials of blood drawn, finally peed in the cup, and then got to go home.  I sent Dad a picture of my ultrasound and he responded, “He’s (underlined) looking good”.  It’s exciting to see my Dad so into this!